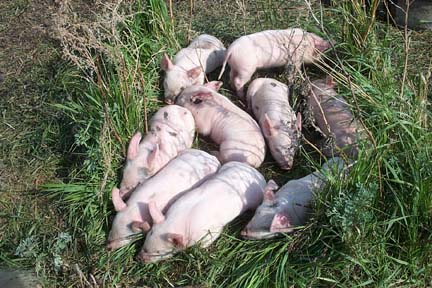 Pigs in the pasture

Smaller is Smarter; Farms not Factories

Hog Watch Manitoba is a non-profit organization, a coalition of environmentalists, farmers, friends of animals, social justice advocates, trade unions and scientists. We are promoting a hog industry in Manitoba that is ethically, environmentally and economically sustainable.
There are many concerns about threats to the environment, inhumane conditions for the animals and unsustainable economics that have lead us to form Hog Watch Manitoba and to advocate for an alternative model for the hog industry.

The Covid19 pandemic has highlighted the lack of resiliency in Canada’s food system with the closure of several large scale slaughter plants due to outbreaks of Covid19 in the plants. The centralization of slaughter plants 3 decades ago has led to a loss of ability to ensure food sovereignty in each province as well as leaving farmers with no options where to take their animals for processing. The closure of most of the smaller plants and local abattoirs in the country in favour of the few large transnational corporate plants, took away the possibility of providing local markets with local products from local farms. The majority of family farms couldn’t survive as the move to produce more animals for less money took over. Producers are now paid significantly less per animal than they were paid 3 decades ago, when adjusted for inflation. The move to bigger farms with thousands of animals in each building has led to increased animal welfare concerns, greater environmental threats from amounts of manure produced, and unsafe working conditions for humans in the barns due to toxic air quality.

Hog Watch Manitoba is calling for the following in pursuit of a just, green recovery from the Covid19 crisis.

• We support the establishment of several smaller slaughterhouses in each province that will allow the processing of local animals from local farms to meet local market demand. Regulations for these provincially inspected plants need to change to allow them to sell product to local stores. The workers in these plants must be paid a decent living wage and conditions in the plants need to be safe with slower line speeds.

• We support alternative housing systems for pigs that includes family group housing for breeding sows and straw-based housing for all pigs.

• We are calling for the phase-out, over the next decade, of all liquid manure systems. In the interim all liquid manure operations should immediately take the following steps:
1.have groundwater monitoring wells installed
2.treat the liquid waste through environmentally acceptable processes to kill off unwanted pathogens
3.phase out the use of sub-therapeutic antibiotics

• We support the family farm and feel that the true family farm is one in which the family are engaged in the day to day labour and management of the farm and reside on the property. As a necessary component of promoting the family farm, we are calling for the reinstatement of single desk selling of hogs which provides equity, economic bargaining power and price transparency.

• We believe that all workers, including agricultural workers, should be protected by labour legislation such as the Employment Standards Code.